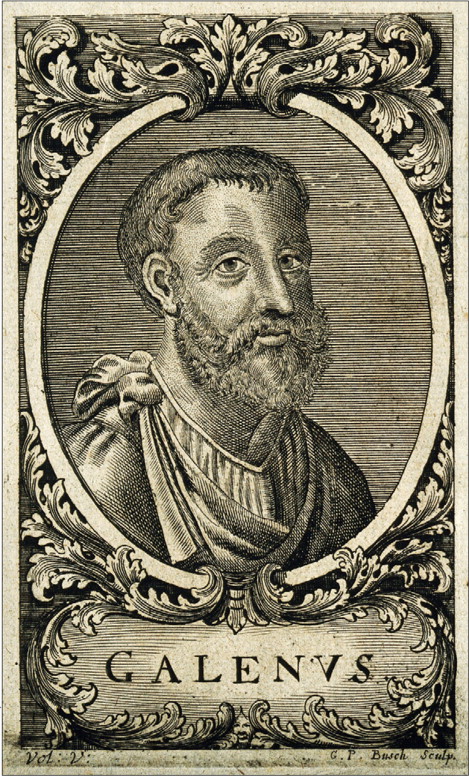 Aelius Galenus or Claudius Galenus (; September 129 – c. AD 216), often Anglicized as Galen () or Galen of Pergamon, was a Greek physician, surgeon and philosopher in the Roman Empire. Considered to be one of the most accomplished of all medical researchers of antiquity, Galen influenced the development of various scientific disciplines, including anatomy, physiology, pathology, pharmacology, and neurology, as well as philosophy and logic.

The son of Aelius Nicon, a wealthy Greek architect with scholarly interests, Galen received a comprehensive education that prepared him for a successful career as a physician and philosopher. Born in the ancient city of Pergamon (present-day Bergama, Turkey), Galen traveled extensively, exposing himself to a wide variety of medical theories and discoveries before settling in Rome, where he served prominent members of Roman society and eventually was given the position of personal physician to several emperors.

Galen's understanding of anatomy and medicine was principally influenced by the then-current theory of the four humors: black bile, yellow bile, blood, and phlegm, as first advanced by the author of ''On the Nature of Man'' in the Hippocratic corpus. Galen's views dominated and influenced Western medical science for more than 1,300 years. His anatomical reports were based mainly on the dissection of Barbary apes. However, when he discovered that their facial expressions were too much like those of humans, he switched to other animals, such as pigs. The reason for using animals to discover the human body was due to the fact that dissections and vivisections on humans were strictly prohibited at the time. Galen would encourage his students to go look at dead gladiators or bodies that washed up in order to get better acquainted with the human body. His anatomical reports remained uncontested until 1543, when printed descriptions and illustrations of human dissections were published in the seminal work ''De humani corporis fabrica'' by Andreas Vesalius where Galen's physiological theory was accommodated to these new observations. Galen's theory of the physiology of the circulatory system remained unchallenged until c. 1242, when Ibn al-Nafis published his book ''Sharh tashrih al-qanun li’ Ibn Sina'' (''Commentary on Anatomy in Avicenna's Canon''), in which he reported his discovery of pulmonary circulation.

Galen saw himself as both a physician and a philosopher, as he wrote in his treatise titled ''That the Best Physician Is Also a Philosopher''. Galen was very interested in the debate between the rationalist and empiricist medical sects, and his use of direct observation, dissection, and vivisection represents a complex middle ground between the extremes of those two viewpoints. Many of his works have been preserved and/or translated from the original Greek, although many were destroyed and some credited to him are believed to be spurious. Although there is some debate over the date of his death, he was no younger than seventy when he died. Provided by Wikipedia
Showing 1 - 4 results of 4 for search 'Galenus', query time: 0.03s Refine Results
1
Loading...
Mulaḫḫaṣ-i Fuṣūl-i Buqrāṭī
by Hippocrates, Hippocrates
Published 1903
Other Authors: “...Galenus...”