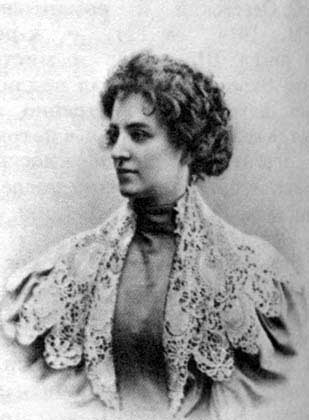 Zinaida Nikolayevna Gippius (Hippius) (; – 9 September 1945) was a Russian poet, playwright, novelist, editor and religious thinker, one of the major figures in Russian symbolism. The story of her marriage to Dmitry Merezhkovsky, which lasted 52 years, is described in her unfinished book ''Dmitry Merezhkovsky'' (Paris, 1951; Moscow, 1991).

She began writing at an early age, and by the time she met Dmitry Merezhkovsky in 1888, she was already a published poet. The two were married in 1889. Gippius published her first book of poetry, ''Collection of Poems. 1889–1903'', in 1903, and her second collection, ''Collection of Poems. Book 2. 1903-1909'', in 1910. After the 1905 Revolution, the Merezhkovskys became critics of Tsarism; they spent several years abroad during this time, including trips for treatment of health issues. They denounced the 1917 October Revolution, seeing it as a cultural disaster, and in 1919 emigrated to Poland.

After living in Poland they moved to France, and then to Italy, continuing to publish and take part in Russian émigré circles, though Gippius's harsh literary criticism made enemies. The tragedy of the exiled Russian writer was a major topic for Gippius in emigration, but she also continued to explore mystical and covertly sexual themes, publishing short stories, plays, novels, poetry, and memoirs. The death of Merezhkovsky in 1941 was a major blow to Gippius, who died a few years later in 1945. Provided by Wikipedia
Showing 1 - 1 results of 1 for search 'Gippius, Zinaida', query time: 0.02s Refine Results
1
Loading...
O ljubvi
by Gippius, Zinaida, Gippius, Zinaida
Published in Soṿeṭish heymland (1991)
Call Number: Loading...
Located: Loading...
Article Loading...
Save to List