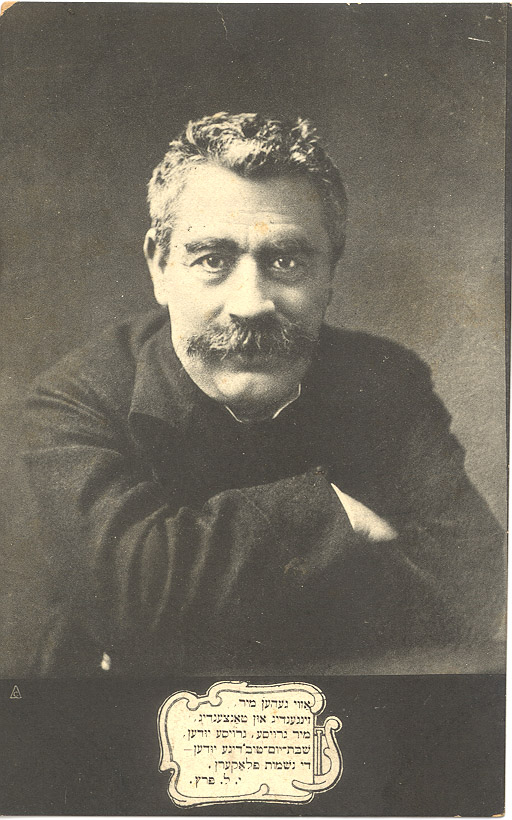 Isaac Leib Peretz (, ) (May 18, 1852 – April 3, 1915), also sometimes written Yitskhok Leybush Peretz was a Polish Jewish writer and playwright writing in Yiddish. Payson R. Stevens, Charles M. Levine, and Sol Steinmetz count him with Mendele Mokher Seforim and Sholem Aleichem as one of the three great classical Yiddish writers. Sol Liptzin wrote: "Yitzkhok Leibush Peretz was the great awakener of Yiddish-speaking Jewry and Sholom Aleichem its comforter.... Peretz aroused in his readers the will for self-emancipation, the will for resistance against the many humiliations to which they were being subjected."

Peretz rejected cultural universalism, seeing the world as composed of different nations, each with its own character. In Liptzin's account, "[e]very people is seen by him to be a chosen people, chosen by its peculiar history, geography and ethnic composition"; he conceived of Jewish literature as "grounded in Jewish traditions and Jewish history", and as "the expression of Jewish ideals".

Unlike many other Maskilim, he greatly respected the Hasidic Jews for their mode of being in the world; at the same time, he understood that there was a need to make allowances for human frailty. His short stories such as "If Not Higher", "The Treasure", and "Beside the Dying" emphasize the importance of sincere piety rather than empty religiosity. Provided by Wikipedia
Showing 1 - 1 results of 1 for search 'Peretz, Isaac Leib', query time: 0.02s Refine Results
1
Loading...
Ne pozhelai
by Peretz, Isaac Leib, Peretz, Isaac Leib
Published in Soṿeṭish heymland (1991)
Call Number: Loading...
Located: Loading...
Article Loading...
Save to List