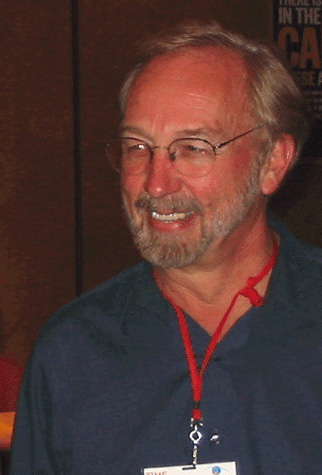 John Burdette Gage (born October 9, 1942) was the 21st employee of Sun Microsystems, where he is credited with creating the phrase The Network is the Computer. He served as vice president and chief researcher and director of the Science Office for Sun Microsystems, until leaving on June 9, 2008, to join Kleiner Perkins Caufield & Byers as a partner to work on green technologies for global warming; he departed KPCB in 2010 to apply what he had learned "to broader issues in other parts of the world".

In 2006, he joined the board of the Tegla Loroupe Peace Foundation, to build a school and orphanage in Kapenguria, in remote north-west Kenya.

In 2012, he helped build the Kibera Town Centre, a major water and community education center in the middle of Kibera, Kenya, the largest slum in Africa.

He is known as one of the co-founders of NetDay in 1995, a crowd-sourced effort to bring the Internet to every school in the world. NetDay was the first large-scale crowd-sourced mass movement on the Internet. He joined the Human Needs Project in 2012 to build a networked water source and water treatment plant in the Kibera slum in Nairobi, Kenya.